We're delighted to say that Imago has surpassed our expectations. When we started production, we thought of it as an experiment. In the process, we felt that it was shaping up to be a nice videodance piece with a few extra contextualising bits and pieces. And we ended up with screenings and nominations in festivals, having the concept evolve to a multi-part series. 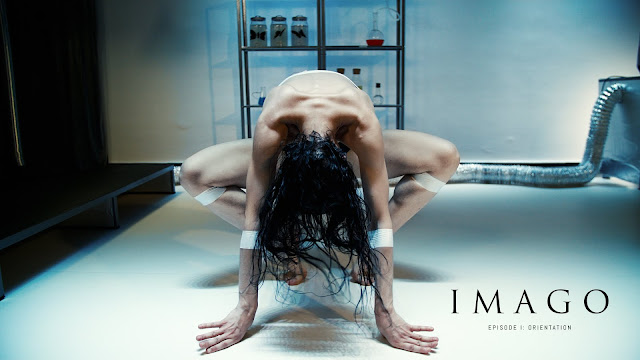 Our private October view at Vitruvian Thing aside, Imago Ep.I premiered at the Athens International Digital Film Festival in late December. It is also an official selection at Goldensun festival in Malta, with the screening taking place sometime in January (to be updated). Finally, it received a Best Experimental Film nomination at the TMFF festival in Glasgow, also nominated for Best Trailer.

Additionally, Imago has been selected for TV broadcast in various locations around the world. More details will be disclosed as soon as we have the details available. The film is being considered at various other festivals during 2016, so we're confident there will be more screening news.

We'd like to thank everyone that voted for Imago for the audience award at TMFF. We ended up in third place at vote count, I believe with the highest average. Since the film was not publicly available, we didn't really think it would be possible to go ahead and top the list, so 3rd is a pleasant surprise. Again, thanks to everyone for your support!

During this time, we kept Imago out of the net. Initially, when we finished the final master in early October, we were half-minded to publish it on Vimeo right away. We certainly did not regret not doing so. Having people over at the screenings was a completely different experience, for us and for them, insofar as it made the event special, necessitating a process: one had to be at a specific place, at a specific time. We felt it added value to our film, and we thought it was perceived as such.


On the technical side, we got to present it (almost) exactly as we meant, in terms of image and audio quality. At least in Vitruvian Thing, that is, which is turning out to be a mighty mini-cinema, certainly leaps and bounds ahead from the antiquated cinemas where we saw our film projected. Don't get us wrong, we appreciated the opportunity, if only for the learning experience. But we do think that it's a shame that these otherwise fine buildings cannot frame properly, sound around 10dB quieter than they should according to Dolby standards, and have so much stray light that black looks like middle grey, producing a contrast that is worse than a home projector. Nobody had even heard of calibration standards there, as well, and, in keeping with the proud traditions of our country, nobody was even remotely interested in learning about it, or at least discussing it. What can you do...

Our screening adventures have led to a new idea, that relates to screenings of local experimental films, cinedance, and video art pieces, at Vitruvian Thing. We are almost through with organising this event, and we'll post details on our usual channels very shortly.

Also, there will be an IPTV broadcast of Imago sometime in January. Subscribe to our mailing list (die-wolke.org, scroll halfway down the page) to be sure to get the details!

Until then, we would like to wish a happy, creative, and productive new year to everyone. We've left you something...